Simone Lovett had become so comfortable with a cyst in her breast coming back as benign that she nicknamed it 'Arnie" after Arnold Schwarzenegger's famous 'It's not a tumour' line in Kindergarten Cop.

But last year, nine years after first noticing the small fibroadenoma (small benign cyst) in her breast, it suddenly turned malignant and would result in a mastectomy.

Learning she had the extremely rare form of breast cancer known as a Cystosarcoma Phyllodes Tumour in 2019 has been a life-changing journey for Simone which continues to this day. 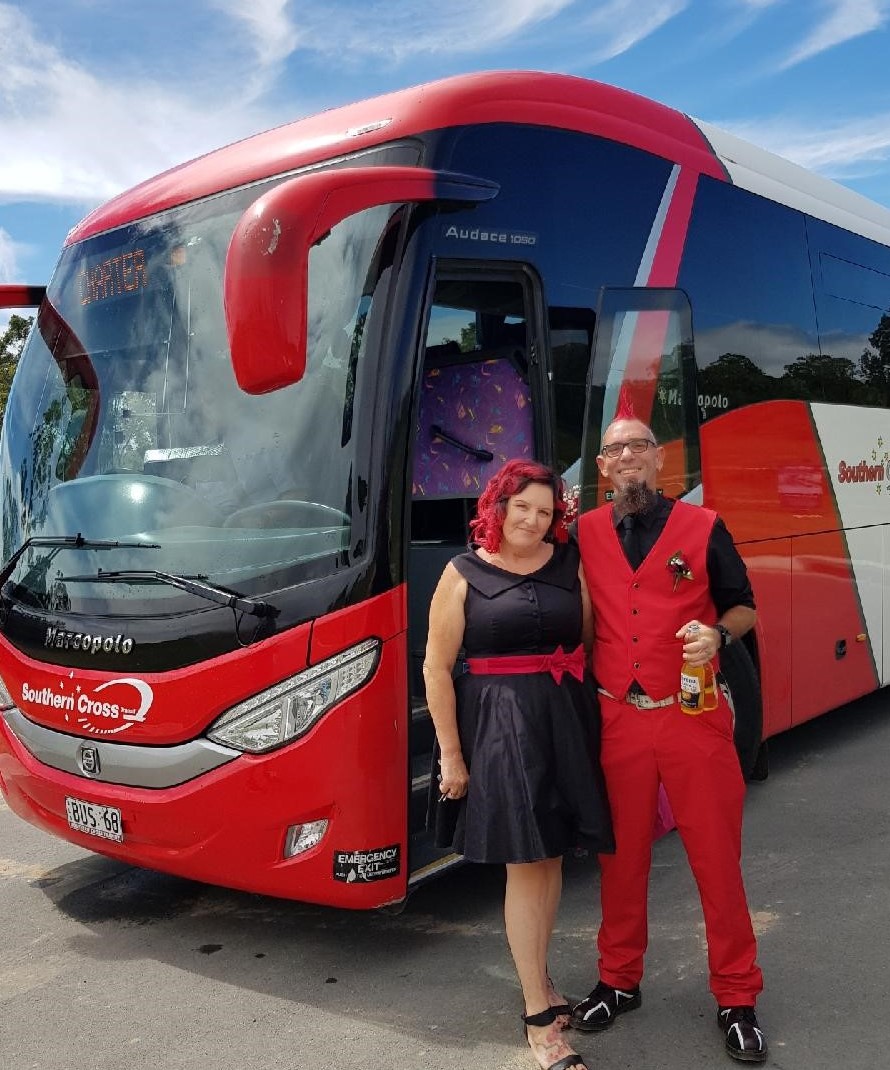 Simone and husband Duncan, himself a survivor of Non-Hodgkin's Lymphoma.\

She now faces an uncertain future while searching for information about a form of cancer that even her GPs knew nothing about, ahead of her next appointment at the PA Hospital (PAH) in August.

"In the two and a half years since my last mammogram, it had grown exponentially," Simone said.

"It started at 7 millimetres and was now four centimetres by eight. They biopsied it and again it was benign. But the lady at Breast Screen said, "Is it hurting?", I said "No, but it rubs on the underwire on my bra", so they decided to remove it."

"We gave 'Arnie' a send-off party and I went in the following week assuming I was just going to be told, "You're healing up nicely", and get told, "We have to do a mastectomy and we have to do it now."

With her mastectomy of her left breast taking place on 5 September 2019 at the PAH under the care of Breast and Endocrine Surgeon, Professor Ian Bennett, Simone started to do as much of her own research as she could about her diagnosis.

"They do not respond to radiation or chemotherapy, therefore gold standard practice is mastectomy," she said.

"I've been doing a lot of reading and found out exactly how rare it is. It's a 0.1% out of all breast cancers. Only one in four are malignant, so the rest are either benign or what's considered borderline.

With phyllodes tumours residing in the breast tissue as opposed to the more common forms of breast cancer in the milk ducts and lymph nodes, Simone is considering a second mastectomy to remove further risks as the recurrence rate for Phyllodes tumours is 40% within two years.

As PAH staff have told her at the moment she is in 'remission' or there is no evidence of disease ahead of her August appointment, the breast cancer survivor and self-described 'amazon' said she would love to see more support for research and awareness of rarer forms of cancer such a hers.

"They're now finding that it may be genetic. I've got a 30-year-old daughter who, because of her age, can't get mammograms because she's too young," she said.

"We don't know whether the drug was keeping things at bay, and me stopping taking it because I had another health issue where I had to go on IV antibiotics was a factor.

"I'm all for research and clinical trials. It's the only way the scientific community is ever going to learn enough to get on top of these things.

"I am on the list for most of the clinical trial things going on in Queensland and there's never anything for my type of breast cancer. There's stuff for the estrogen-positive cancers, triple-negative, lobular cancer, some of the other breast cancers, but nothing ever that I've found that even remotely looks at phyllodes tumours.

"There are so many other cancers, even in the breast cancer field that people don't know about and if we can get the message out maybe more people will go get a mammogram and not sit there thinking, "It won't happen to me"."